There was a modest increase in the cost of living in the September quarter for retirees.

The ASFA Retirement Standard September quarter figures indicate that couples aged around 65 living a comfortable retirement need to spend $60,843 per year and singles $43,200, up 0.4 and 0.6 per cent respectively on the previous quarter. At the modest level the increase was 0.6 per cent for both singles and couples. These increases are slightly higher than the 0.4 per cent increase in the All groups CPI.

Association of Superannuation Funds of Australia (ASFA) CEO Dr Martin Fahy said “the fact that the cost of retirement over the most recent quarter only increased by a relatively small amount is welcome news for retirees but relatively low rates of price increases are more the exception than the rule in Australia over the longer term.

“Retirement can stretch over three decades or more and retirees need to be prepared for and invest for the long term.”

Chart 1 below, which comes from a recent Australian Bureau of Statistics paper on long term movements in the level of the CPI, shows that the current decade has the lowest average rate of increase in the CPI in the seven decades that the CPI in its current form has been published.

However, external shocks to the economy, such as high commodity prices or an adverse movement in the exchange rate or an oil price shock, have the potential to impact on prices and wages in the Australian economy.

For instance, high commodity prices and growing domestic demand in the latter stages of the Global Resources Boom saw year-ended inflation rise to a peak of 5 per cent in September 2008.

A continuation of the current drought also is likely to put upward pressure on food costs in the year ahead, with this likely to be exacerbated by relatively high costs of fuel.

While the overall rate of inflation was relatively low over the last 10 years (with the CPI growing by 22 per cent in total), some costs grew strongly. For instance, over the ten years to September 2018:

Price increases were much more modest for discretionary expenses, such as for leisure, communications, electrical appliances, home items and clothing. 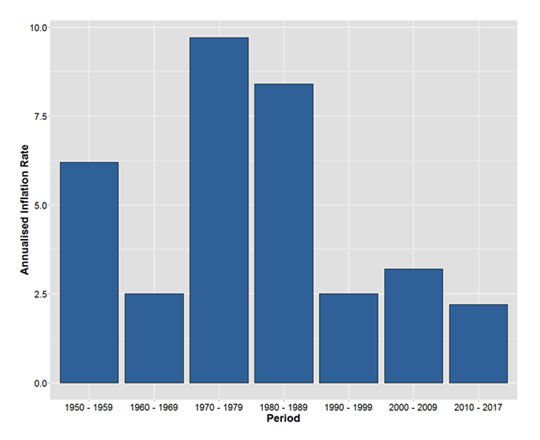 “We recommend you get in touch with your superannuation fund to find out what options are available to you, so that you have the best chance of coping with future price increases and living your post-work years free from major financial worries,” said Dr Fahy.

The main contributor to the rise in transport costs this quarter is automotive fuel (+1.4%) due to continued increases in world oil prices flowing through to consumers. Automotive fuel fell in July (-2.0%) and August (-0.1%) and rose in September (+5.2%), to reach its highest quarterly price index level since 2014.

Food costs increased by 0.5 per cent, around the average rate of inflation for the quarter. The main contributors to the rise in the food and non-alcoholic beverages group this quarter were fruit (+2.4%) and vegetables (+1.6%). Adverse weather conditions earlier in the year have impacted the supply of fruit and vegetables, leading to an increase in prices.

Table 1: Budgets for various households and living standards for those aged around 65 (September quarter 2018, national)

Table 2: Budgets for various households and living standards for those aged around 85 (September quarter 2018, national)

The figures in each case assume that the retiree/s own their own home and relate to expenditure by the household. This can be greater than household income after income tax where there is a drawdown on capital over the period of retirement. All calculations are weekly, unless otherwise stated. Annual figure is 52.2 times the weekly figure.

More information
Costs and summary figures can be accessed via the ASFA website. Australians can find out more about superannuation on the independent Super Guru website.

5 tips to pay off debts and save money after the holidays
Are you missing out on tax deductions??
Comment