Life Begins At » Frankenswine: scientists bring pig brains back to life after death

US scientists have restored circulation and cellular activity in 32 pig brains, a result that could help stroke patients but raises ethical questions.

A Frankenstein-style experiment has breathed life into the brains of pigs four hours after death.

Scientists in the US restored circulation and cellular activity in 32 pig brains obtained from a meat-packing plant.

The study showed the death of brain cells could be halted and that some connections in the brain were restored.

However, there were no signals from the brain that would indicate awareness or consciousness.

The surprise findings challenge the idea that the brain goes into irreversible decline within minutes of the blood supply being cut off. 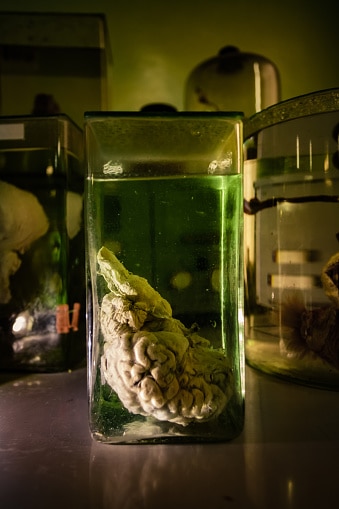 They could start a debate about the barrier between life and death, and provide a new way of researching illnesses like Alzheimer’s or Parkinson’s.

Cellular brain death is usually considered to be swift and irreversible.

How  was it done?

Thirty-two pig brains were collected from a meat-plant and four hours later the organs were connected to a system made by the team at Yale University.

It rhythmically pumped, to mimic a pulse, a specially made cocktail around the brain that contained a synthetic blood to carry oxygen and drugs to slow or reverse the death of brain cells.

The liquid was given to the dead animal brains for six hours.

During this time the scientists observed a reduction in cell death and the restored functionality of certain nerve, blood vessel and glial cells.

Glial cells are important brain “support cells” that hold neurons in place, feed them with nutrients and oxygen, provide insulation, and clean up the carcasses of dead cells.

The revived activity even included some synaptic function, the transmission of signals between neurons.

Details of the study are published in the latest issue of Nature journal.

Lessons learned from the study could in future help doctors find ways to salvage brain function in stroke patients, or test the effectiveness of treatments designed to aid cellular recovery after injury, say the scientists.

The “BrainEx” system developed at Yale could also provide a powerful research tool.

Any future studies involving human tissue or the possible revival of global electrical activity in “dead” animal brains would have to undergo strict ethical supervision, the team stressed.

However, it was unclear that the technique would work in a recently deceased human brain.

The chemical solution lacked many components found naturally in human blood, such as immune system cells.

British expert Professor Derek Hill, from University College London, said: “This research raises some fascinating questions. Firstly, was this somehow a chance finding, or can it be reliably replicated?

“Secondly, could brains maintained by BrainEx help scientists discover new treatments for brain diseases like Alzheimer’s and Parkinson’s disease, which are proving really hard to treat?

“And thirdly, what are the ethical implications for the way we treat animals after slaughter, and humans after accidents?

“This ingenious experimental work provides challenges and opportunities both to brain scientists and for science policy makers.”

New cot cams to keep families and newborns together

Get REDDY Australia: When Rugby is the Real Deal!